Have more skin in the game

Everyone in the boardroom turned to me in anger.

I spent much of my former career doing two jobs: leading large brands and running major marketing transformation programmes. I loved both. And in both, when it came to success, my head was on the table. In marketing, I owned quarterly revenues and costs. In change programmes, it was customer gains or cost targets.

I didn’t always get it right. Some years ago, during a digital transformation, the software vendor screwed up. We had to manually run over 100 campaigns from an Excel spreadsheet on my laptop. We worked all night. In the end, it wasn’t enough. We didn’t hit the retention target. To be precise: I didn’t hit the target. I was the transformation leader. This was my job. There went my reputation (and my bonus). But I didn’t think for a moment that it was unfair. The project failed. I was on the hook.

Years later, I sat in a boardroom across the table from a 10-person software marketing team, breaking the bad news. The group had asked me to look at ways for them to become more influential. For years, they had been struggling to get their CEO’s attention. In a management meeting, he had even said the company’s marketing was having too little impact.

The team was in good company. Forbes found 69% of CEOs believe their companies’ marketing money is wasted. You’ve heard this before.

For some weeks I looked in detail into how the team was spending their time, what type of activities they were doing, and how well they were executing. There was much to applaud. The team had high standards. Even for new things like content generation, they already worked with leading experts, did peer reviews, and had established best practices. They also had a pretty good training programme.

Despite these positives the firm was in hot water. The business had slowed. They were losing market share. Yet when I looked at the team’s performance assessments, everyone scored high. Something wasn’t adding up. With some investigation, the disconnect became clear. People’s performance targets were mostly internal; things like number of campaigns, on-time launches, customer contacts, collaboration and so on. Business outcomes? Zero. Not one single team member was on the hook for things like market share, revenues or profit.

“You all have top performance ratings while revenues are falling. You have no skin in the game,” I started my summary.

I didn’t make myself many friends with that assessment. The team became defensive. One leader objected: “Marketing is mostly indirect.” The product marketing leader said: “We can’t be blamed when sales don’t have their act together.” And the head of communication asserted: “It’s all about long-term brand engagement – not next week’s sales.” I listened patiently. At the end, I summarised their comments: “So you don’t have skin in the game – and you’re OK with that.”

To me, their CEO’s criticism was merited. The team worked hard. But even if the business was tanking, they could give themselves five-star ratings. In marketing, it shouldn’t be like that.

After a long debate, I got the team to set revenue-related targets for every leader. A year later, the CMO told me it was a game changer. Marketing now has a weekly board meeting slot.

Every marketing activity somehow affects how much money a firm makes – today or tomorrow. If, for example, a campaign is awesome, customers may buy right away, or next week – or even later. On the other hand, if a campaign is terrible, or nobody sees it, it costs the company. To be fair, many revenue effects are hard to measure. Hard – not impossible. The marketing-profit link is so obvious that I’m always flabbergasted when marketers don’t embrace their skin in the game.

But marketers’ revenue line distance may not always be their fault. Some days ago, in New York, I did a workshop with a group of hand-picked, highly talented marketers. In their peer group, they are best of the best. We were having a good time until I posed a simple question: “What’s your work worth – in real money?” A tense silence ensued. I’m certain many people had similar thoughts to those of my software marketing team (“mostly indirect”, etc.) But this was a room of super smart people.

We discussed marketing metrics, did some number crunching. As we talked, something else become clear: these smart young people were trained in university and by their bosses not to have skin in the game. Only some had revenue or profit targets – or even discussed them. Most were just told: do good work. Twenty-four hours later, everyone in the room had a number: a revenue number, a profit number. More importantly, everybody was convinced they can have skin in the game.

If companies are to succeed, marketers must be invested. But that’s not the norm. Many firms still reward marketers by their effort: how many pieces they make, how lovely the campaigns are, how great the collaboration is. To be fair, it takes many people to make the sale: production, marketing, sales. It’s a long way from the factory output to revenue.

But rewarding people’s effort – not market success – has two flaws. First, it suggests people can’t figure out how marketing drives revenue and profit. You don’t have to be a genius to see that’s nonsense. There are many ways to measure – or at least estimate – marketing’s impact, from simple tools like the funnel to fancy software with all its bells and whistles. Are these measurements perfectly accurate? No. But close-enough metrics are good enough to judge performance.

Second, rewarding marketers for effort – as opposed to revenue or profit – does tremendous harm to companies: it builds leaders without skin in the game. In the spring of 2013, BlackBerry’s marketing team went on a lavish multimillion-dollar spending spree for the new Z10 to build – mostly long-term – brand engagement (Super Bowl ads included). In the same quarter, the firm lost over $1bn and weeks later fired 40% of its workforce. The business had run out of cash. The BlackBerry workers had skin in the game; the marketers didn’t.

(From my Marketing Week column)

Get exclusive insights, recommendations, and tips from one of the world's top expert on marketing leadership

Thanks. You email is underway (please check your SPAM folder too) 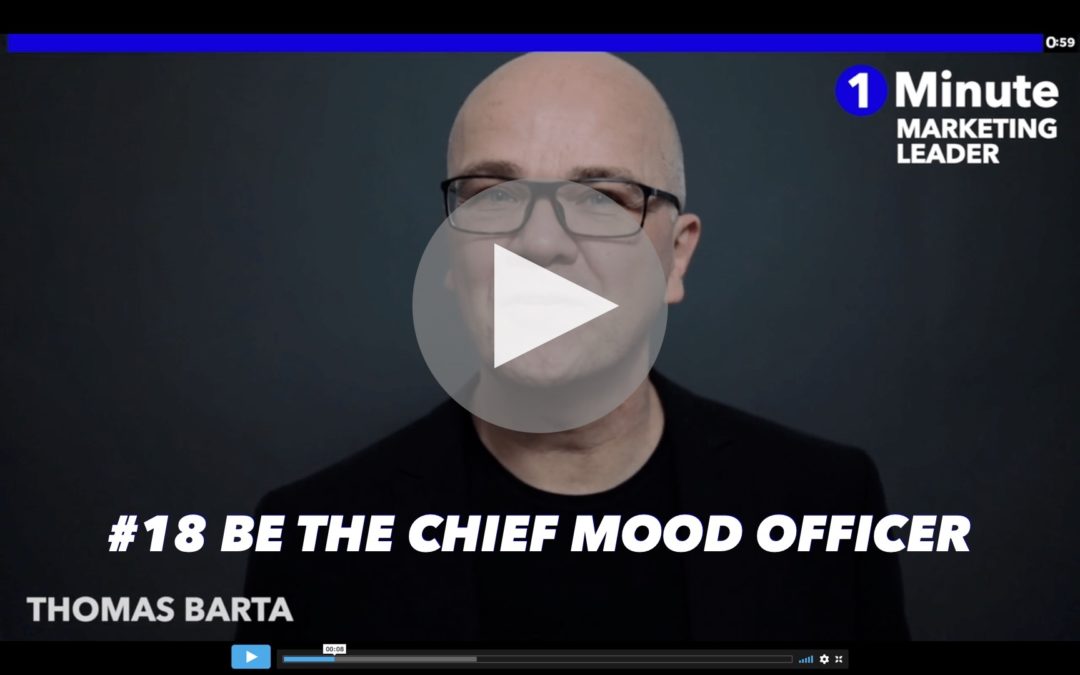 When you are leading a team, you are the Chief Mood Officer too. 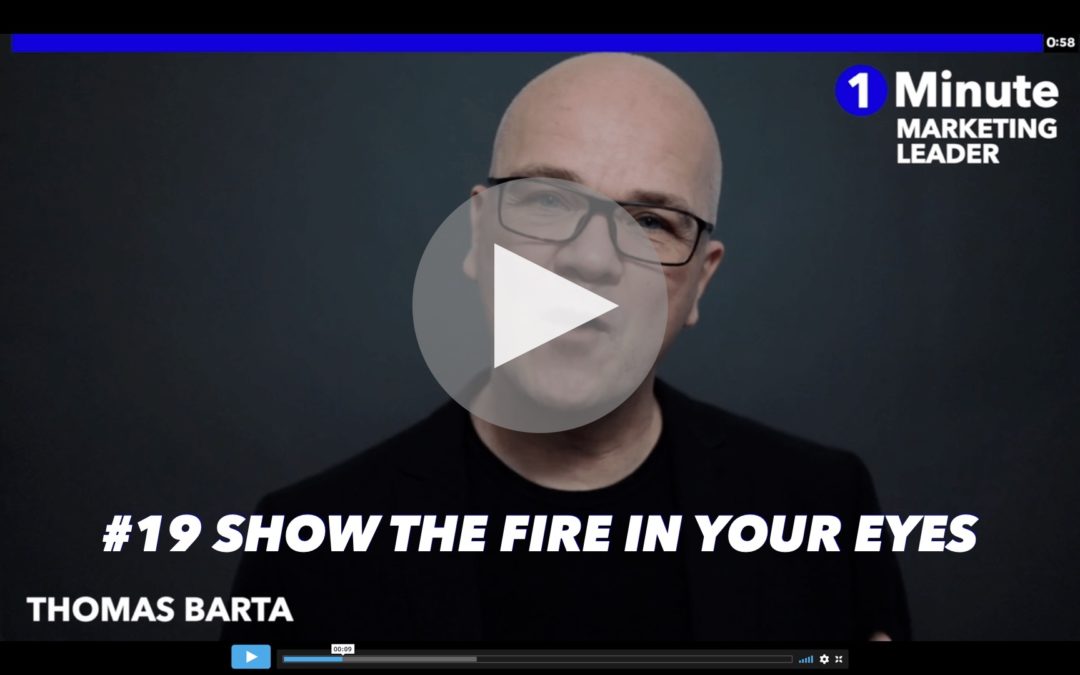 1 Minute Marketing Leader #19: Show the fire in your eyes 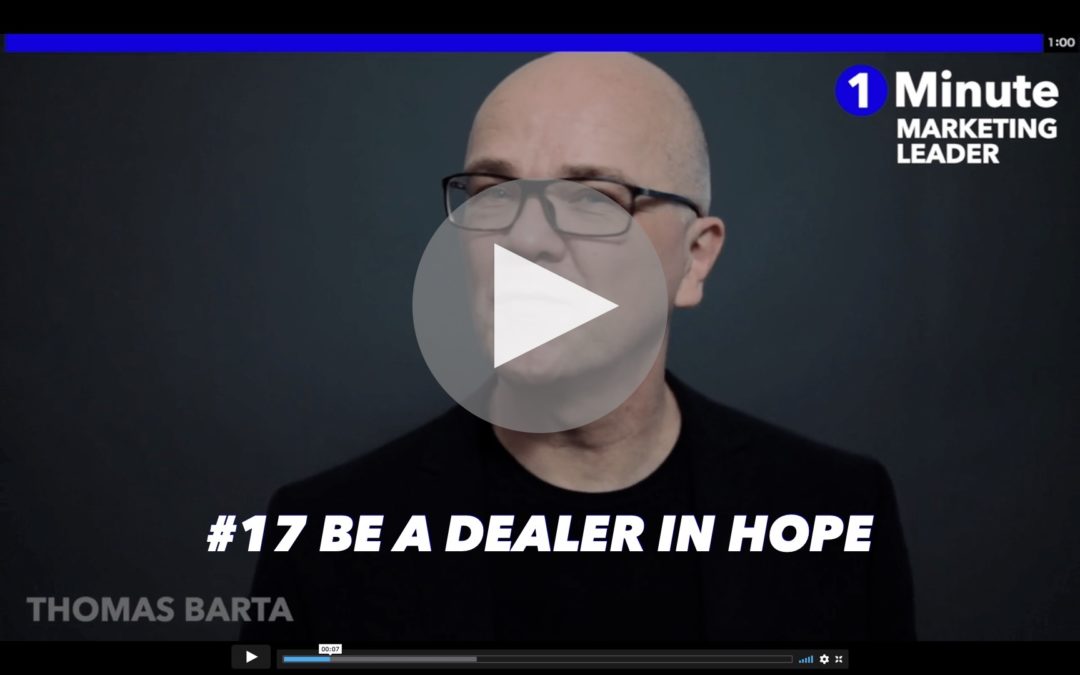 1 Minute Marketing Leader #17: Be a dealer in hope

For almost every marketing project, you want other to change. You’ll need more than a story—but a good story helps.

This website uses cookies to improve your experience while you navigate through the website. Out of these cookies, the cookies that are categorized as necessary are stored on your browser as they are as essential for the working of basic functionalities of the website. We also use third-party cookies that help us analyze and understand how you use this website. These cookies will be stored in your browser only with your consent. You also have the option to opt-out of these cookies. But opting out of some of these cookies may have an effect on your browsing experience.
Necessary Always Enabled
Necessary cookies are absolutely essential for the website to function properly. This category only includes cookies that ensures basic functionalities and security features of the website. These cookies do not store any personal information.
Non-necessary
Any cookies that may not be particularly necessary for the website to function and is used specifically to collect user personal data via analytics, ads, other embedded contents are termed as non-necessary cookies. It is mandatory to procure user consent prior to running these cookies on your website.
Functional
Functional cookies help to perform certain functionalities like sharing the content of the website on social media platforms, collect feedbacks, and other third-party features.
Performance
Performance cookies are used to understand and analyze the key performance indexes of the website which helps in delivering a better user experience for the visitors.
Analytics
Analytical cookies are used to understand how visitors interact with the website. These cookies help provide information on metrics the number of visitors, bounce rate, traffic source, etc.
Advertisement
Advertisement cookies are used to provide visitors with relevant ads and marketing campaigns. These cookies track visitors across websites and collect information to provide customized ads.
Others
Other uncategorized cookies are those that are being analyzed and have not been classified into a category as yet.
SAVE & ACCEPT
Powered by