Why effective leaders must manage up, down, and sideways

Most of the leadership advice aimed at senior functional managers is how to build, align, energize, and guide a world-class team. This is a challenging task in its own right, but we all know it isn’t the whole story. Leaders, even those in the C-suite, must also extend their influence upward and horizontally.

Organization theory suggests that managing upward and sideways is good for both the company and the individual leader’s career: CEOs need the insights and pushback of trusted executives to help sharpen strategy. And complex modern organizations benefit when people engage with their peers across functional and business-unit boundaries to bring a range of perspectives and drive change and innovation.

Our research confirms this theory, and then some. In a wide-ranging study of the leadership actions of chief marketing officers (CMOs)—a good proxy, we believe, for the skills and behaviors of functional leaders in general—we’ve shown how managing upwards (the CEO) and mobilizing colleagues increases business impact and career success. (For leadership research on another C-suite proxy, the CFO, see “How functional leaders become CEOs.”) To test our hypothesis, we asked more than 1,200 senior marketing executives from 71 countries about their perceived business impact (contribution to revenue and profit growth), their career success, and their characteristics against 96 variables. Using statistical techniques (explained below1 ), we were able to relate to these outcomes the 96 variables (which included leadership behaviors, functional skills, personality traits, sociodemographic variables, and external factors, such as peoples’ fit with the company). We supplemented this research by analyzing existing 360-degree data on 7,429 marketing and nonmarketing leaders—a total of 67,278 individual evaluations by these leaders’ bosses, peers, subordinates, and themselves.

Managing upwards and sideways is a big factor for success

Our findings lend support to the notion that senior executives should pay more attention to mobilizing their bosses (managing upwards) and functional colleagues (managing sideways) (exhibit). Taken together, these upward and horizontal actions were about 50 percent more important than managing subordinates for business success (45 percent versus 30 percent)—and well over twice as important for career success (47 percent versus 19 percent).

Managing upwards and sideways can improve your business impact and career success.

Clearly, there’s more to success than managing up and sideways: leading a high-performance functional team accounted for 30 percent of the explained variation in our CMOs’ business impact, and 19 percent for career success, and managing yourself accounted for the remaining variation. Mobilizing subordinates, in particular, is the base executives need to build from if they want to establish credibility with the CEO and with colleagues. The best executives build strong teams, relentlessly enhance team members’ skills, keep subordinates focused with objective performance measures, and establish an environment conducive to trust and loyalty.

But they also do much more. Our model helped us identify the most important specific actions associated with managing upward and horizontally, and our 360-degree survey data confirmed that some of those actions receive less emphasis than they should.2

When we asked CMOs about their primary role, some responded that they “ran the marketing organization” or “led their companies’ advertising and brand campaigns.” We believe many other functional leaders would provide similar departmentally focused responses. By contrast, the most effective and successful leaders in our study were more likely to describe their primary role as increasing company growth or better outreach to customers to improve performance. We found that a key determinant of success was taking on the big issues, those in sync with the CEO’s agenda and contributing to the company’s overall performance. Aligning with the CEO’s strategy explained 10 percent of CMO business impact and 10 percent of career success.

But are functional leaders well aligned with the CEO’s agenda? Seventy-six percent of our CMOs said yes—but just 46 percent of the bosses in our 360-degree database believed their marketers knew where the organization was going. Many functional leaders, it seems, could and should better align with the top.

Building a reputation as an effective user of resources also increases standing with the CEO. In our study, the ability to demonstrate returns explained 12 percent of CMO business impact and 3 percent of career success. Here, we again found a gap: while 67 percent of our CMOs said they had a strong returns orientation, only 39 percent of C-suite executives in another study reported that marketing executives were delivering measurable return on investment for their expenditure.

If you want to build a “movement” within the company, lead from the front with an inspiring story to win the hearts and minds of colleagues, including those who don’t report to you, and with a clear action plan to deliver tangible results. That can initiate a virtuous circle of internal recognition by energizing a cadre of early followers among colleagues. Our research suggests that leading from the front and having a strong narrative together explained nearly 10 percent of business impact and about 20 percent of career success. The ability to reach beyond the marketing silo to executives in areas such as IT and finance explained an additional 13 percent of the variation in both business impact and career success.

Only 56 percent of CEOs, however, described their marketing leaders as role models who lead from the front, and only 61 percent of CMOs said they use their storytelling skills. Tellingly, while marketers are adept at telling stories that mobilize customers to buy their products, we find they are less likely to ply that strength internally, despite the importance of effective engagement with colleagues.

Mobilizing horizontally means walking the halls, getting out of the office to share ideas with peers, listening to their concerns, and working jointly to attack strategic issues. In theory, leaders could do many of their interactions on video these days. But that’s rarely inspiring. Instead, the best leaders connect directly with as many people as possible through town halls when they travel to local markets, and hunker down to help teams solve their biggest problems.

Fortunately, the actions needed to mobilize the CEO and colleagues are often mutually reinforcing. For instance, moves by functional leaders to build support horizontally are often related to their simultaneous efforts to show tangible results and advance the organization’s strategy.

While CEOs rely on functional leaders’ ability to build high-performance teams, much more needs to be done to help these leaders extend their influence upward into the C-suite and horizontally across the organization. Happily, our work suggests that not only business impact but also career success redounds to those CMOs (and, we believe, functional leaders of all stripes) who can increase their span of leadership influence upward and across functions.

(From Patrick’s my McKinsey Quarterly article).

About the author(s)
Thomas Barta is a McKinsey alumnus and was a partner in the firm’s Cologne office; Patrick Barwise is emeritus professor of management and marketing at London Business School. They are coauthors of the new leadership book The 12 Powers of a Marketing Leader: How to Succeed by Building Customer and Company Value (McGraw-Hill Education, September 2016).

Get exclusive insights, recommendations, and tips from one of the world's top expert on marketing leadership

Thanks. You email is underway (please check your SPAM folder too) 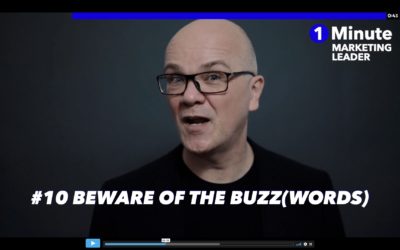 Buzz can be good. Buzzwords rarely are. PS: if in doubt, try “customers”, “revenue”, “profit” 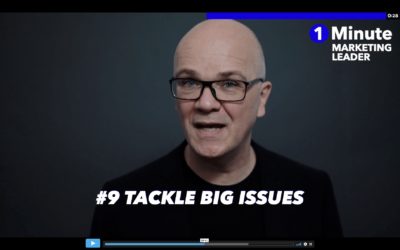 When people cut your budgets, when people don’t put you on that meeting agenda, the reason is often simple. They don’t believe your work is tackling a big issue. 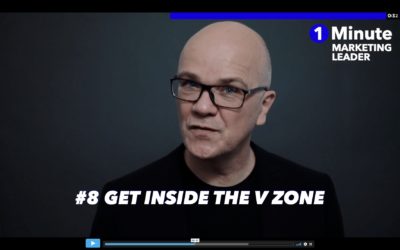 1 Minute Marketing Leader: #08 Get inside the V Zone

If you want power in any organization, you must serve both customers AND the company. We call this: working inside the Value Creation Zone. Or V Zone for short.

Any cookies that may not be particularly necessary for the website to function and is used specifically to collect user personal data via analytics, ads, other embedded contents are termed as non-necessary cookies. It is mandatory to procure user consent prior to running these cookies on your website.

Performance cookies are used to understand and analyze the key performance indexes of the website which helps in delivering a better user experience for the visitors.

Analytical cookies are used to understand how visitors interact with the website. These cookies help provide information on metrics the number of visitors, bounce rate, traffic source, etc.

Advertisement cookies are used to provide visitors with relevant ads and marketing campaigns. These cookies track visitors across websites and collect information to provide customized ads.

Other uncategorized cookies are those that are being analyzed and have not been classified into a category as yet.

SAVE & ACCEPT
Powered by

Send me the details

Want to know more? Get the full brochure and the course calendar. We'll also give you access to a sample session and updates about this and coming classes.

Thank you! We have just sent you the information. Please check your email (and SPAM folder too)